Absolut Pyro Ltd. was established in 2005 with the involvement of the most well-known domestic pyrotechnic experts and companies.

In 2010, our company entered into a merger with Pyrox Kft, the other dominant player in the domestic market, thereby bringing about a major enterprise if considering the Central European region.

With our youthful momentum, reliability and expertise of our experts that look back on several decades our merger has created in all areas of the country the firework service that builds on business and hands on experience, laying a great emphasis on customer demand and satisfying almost all needs. Absolut Pyro Kft. acquired major references alread 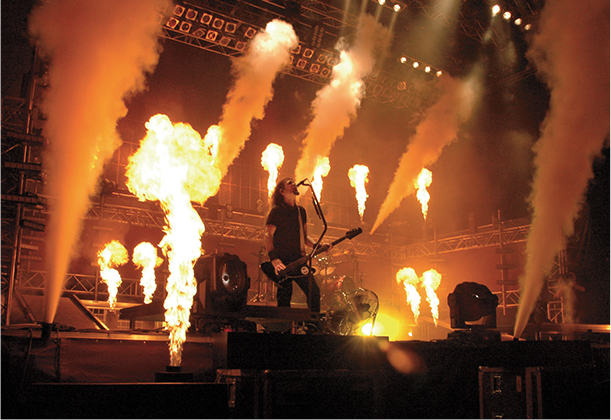 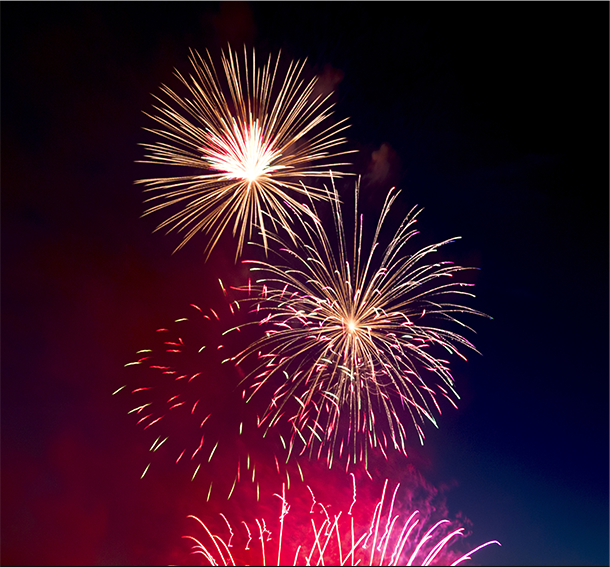 We continue to develop our products in alignment with our quality oriented expectations, in terms of both quality and special scenic effects. Our close to 3000 product types are from the world’s best Chinese and West European manufacturers.
Our product range expands every year with a number of new products, with the choice of colours and shapes in line with current professional trends as well as the direct introduction of new technologies.
Our direct manufacturing relationships allow us to check the quality of products used in our fireworks during the manufacturing process and, if necessary, to immediately improve it because only high quality products can be used.
The safety of the audience and users is extremely important for our firm, as well as the protection of the environment of the fireworks. In order to avoid major accidents, our fireworks are launched from special, fibre-glass and splinter free launch tubes manufactured specially for this purpose.
Our vision plans are always compiled by our experienced designers with pyrotechnic and computer skills. Most of our fireworks are choreographed for music so that the harmony between visual and music is perfect and in “ABSOLUT” harmony.

Apart from being the market leader in the Hungarian pyrotechnic market Absolut Pyro Kft has a significant export turnover in 8 other countries. Our most important target markets are currently Austria, Germany, Czech Republic, Slovakia, Poland, Romania, Serbia and France. Export activity represents a significant proportion of our company’s revenues. Our trading activity is based on the import of professional, game and small fireworks products from China, which we also sell to professional individuals for pyrotechnic or private entertainers through our wholesalers. We have created our own TIGER brand for game and small fireworks products, which became complete in 2015 by the excellent XPLODE brand products of our fusion partner. Our warehouse and logistics park is available to our customers in an area of several thousands of square meters, in compliance with the latest safety guidelines. We are constantly expanding our national commercial network and looking for our qualified partners in this endeavour. 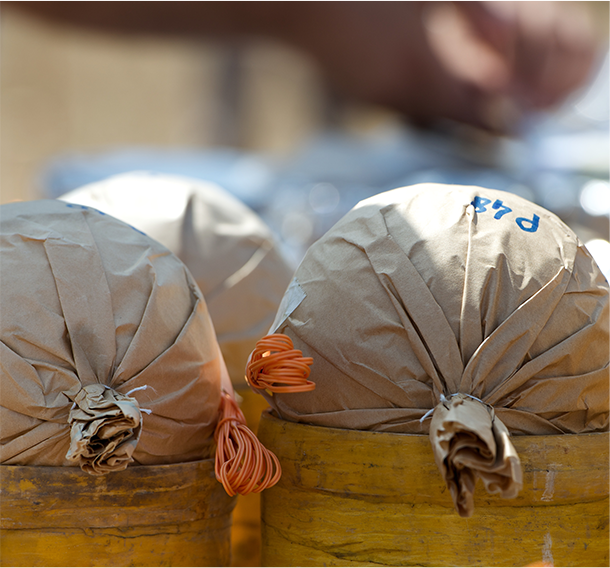 In the framework of our quality management system according to MSZ EN ISO 9001: 2001, we continuously monitor the products we market. Our product inspections and the control of our final product control system are conducted in close cooperation with and under the professional control of the TÜV Rhineland InterCert Ltd. All our products have CE certification.
Dangerous goods are handled only by our pyrotechnics, so their expertise supports our security policy. Each of our products has a safety data sheet. We employ work and fire protection experts to constantly monitor, comply with and having labour, occupational safety and fire protection rules complied with.
As an importer and distributor, we were the first to have the “REACH” registration, which is indispensable for distribution.
We are the only ones to have SEVESO certification among Hungarian pyrotechnic companies. Our company has its own pyrotechnic destroyer in Hungary.
All our activities and products are secured with international insurance companies at the highest possible level.

We are proud to have performed well under the strict conditions of our independent and objective rating systems.

Absolut Pyro Ltd. Has introduced and applies a quality management system in the fields of pyrotechnic services, product trade and event organization, which according to the audit of Cerrtop Product and System Certification Ltd. complies with the international ISO 9001: 2015 standard.

The set goal is the transparency, stability and process verification of the system, which guarantees quality both in the case of the manufactured product and in the field of service.

An effectively designed and operated quality management system enables the organization to produce a product and provide a service that meets customer needs and legal requirements.

Due to the system-based management, the operation of the organization is regulated, the activities are transparent, the responsibilities and powers are clear to all stakeholders. 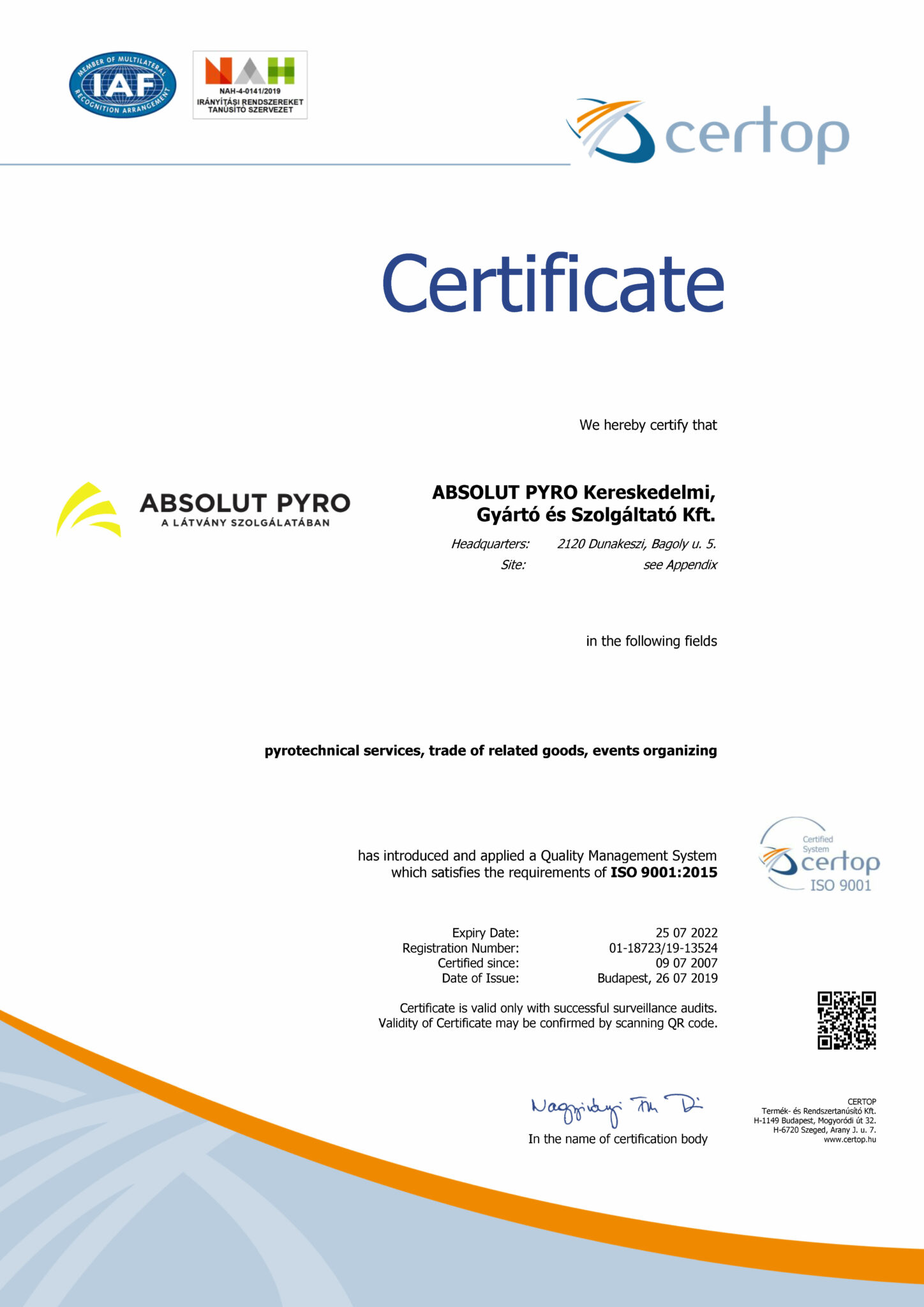 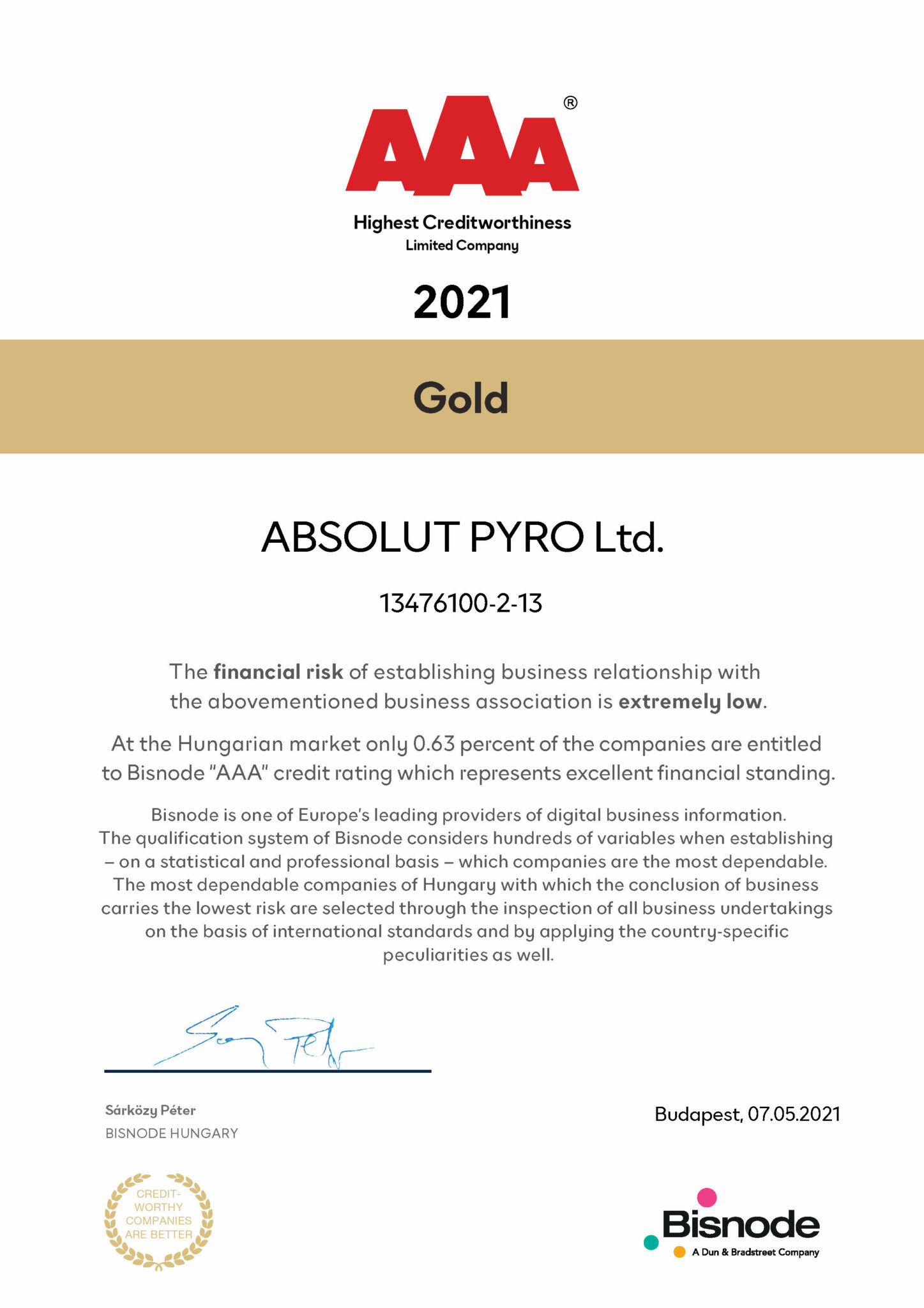 The Bisnode international company rating assesses the financial stability and business reliability of all companies on the basis of a continuously measured and proven system developed by international experts. This is how our company, Absolut Pyro Ltd., Was chosen as one of the most financially stable companies. Based on this, our company belongs to the 9.82% of Hungarian companies that are financially strong, ie they have some kind of Bisnode certificate.

It is a great honor for our company to be among the best based on the objective company rating of Bisnode. We pay a lot of attention to acting fairly in the market, so it is important for us that an external expert has also confirmed that the probability of insolvency of our company is extremely low. We believe that with the help of the Bisnode certificate, we will further increase the trust in our customers, suppliers and employees, which is increasingly important in long-term, stable business relationships. By recognizing the stability of our company as an independent expert, Bisnode sends us the message that we are on the right track in building our company. As the qualification of our company was strictly based on professional criteria and it is neither possible to apply nor apply for it, the Bisnode certificate really differentiates our company positively in the market.

Absolut Pyro Ltd. has received the Bisnode AAA (triple A) certificate, which is held by only 0.63% of companies in Hungary, and indicates that the financial risk of establishing a business relationship with us is extremely low.

The Bisnode rating is based on data from several official sources, such as data from the Ministry of Justice, court records, NAV and other authority data. In addition to data from official sources, it incorporates financial information about the company, such as balance sheet data, income statement, trends. The rating takes into account the demographic data of the company or organization, ie the age, activity, size, owners of the company and their connections. From the data of the Bisnode payment experience program, it is included in the rating whether the given company settles its bills on time or late, ie with what payment discipline. In addition to the above, a number of other collected information is added to the Bisnode rating, such as implementation data or press releases.

As the Bisnode rating shows not only the current financial stability of our company, but also the probability that our company will become insolvent in the next year due to the development of the Bisnode rating, we can proudly say that Absolut Pyro Ltd. will be a stable player in the market in the future.

In addition to our small and wholesale activities, our company is involved in the organization of pyrotechnical training in close cooperation with OKTÁV Training Centre Zrt. This allows applicants to engage in high-quality training and qualification exams several times a year and to obtain various levels of pyrotechnic certification. 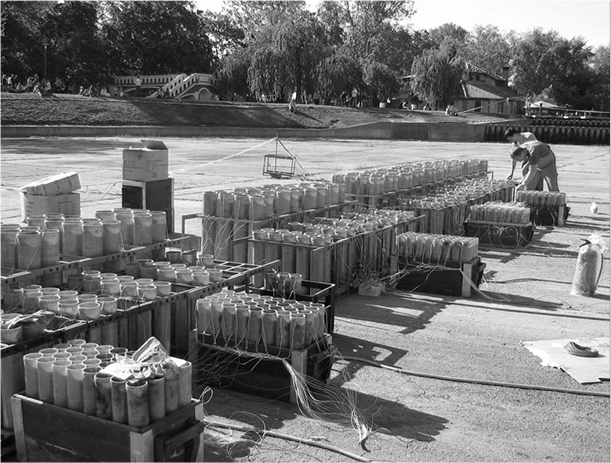